After a  lull of no trialing for about a month, we competed at the Addicted to Agility NADAC trial both days this weekend.  I was super super pleased!!  We have been practicing a number of skills off and on over this past month.  I took a 2 week Agility-U course on Start Lines and have been taking a Data Driven Agility online weave pole class.

One of the skills we’ve been focusing on is building our connection and excitement when out there together.  Driving off the start line with intention, confidence and speed.

While we still had some bobbles with our commitment off the start, I was pleased with the overall improvement.  Even my husband noticed the difference in Zora and my team work for the positive.  She’s always been happy to play, but this weekend she was more consistently ‘up’ each run.  You could feel her excitement to go to the line each run with me.

Our first run of the weekend Elite Touch N Go:

I was less thrilled with her weaves than I was a month ago.  At this point, I’m tabling the issue.  I think a large part of it has to do with her footing, the turf is just slick enough that when she moves the way she does at home through the weaves there she slips a bit, then slows, or pops out and catch 22.  I’d rather she feel safe and so if she feels she needs to slow on that surface in order to do so, then I’m good with it.

Next weekend we’re heading to a training day which will be outside on grass, I’m planning to work her weaves as I do at home and I’m anticipating I’ll get the same performance I get at home.  Grass is just better footing for her than turf.  Unfortunately all of our local trials are on turf, and we have to travel much further to trial on grass. In the summer between the sunlight and heat it’s harder for me to trial outside successfully, indoors the light stays the same throughout the day and I can adjust to compensate.  That said if all things were equal I do much prefer to be outside on grass.

All in all we had a lot of fun (and a lot of qualifiers, 100% Q rate!  16 Qs!).  This was also the first trial of the double run format where every single one of our round 2s was faster than our round 1 (except 2 of the regular rounds which were the same YPS, and we ran them identically same bobbles and all LOL).  Since the local trials shifted to the double run format on January, most if not all of our round 2 runs have been slower than round 1.  I was very pleased with this shift as I feel it shows I’m not slacking on round 2s but working them with the same intention and commitment that I do the round 1s.

Tom was a good boy as well all weekend.  At one point I fell asleep in my chair while petting him (he was on leash out of his x-pen) and he just lay at my feet among the hub-bub of the trial people and dogs walking past patiently waiting for me to wake up.  He’s such a good fella.  My sister and the kids came by on Sunday to watch for a bit which is always fun. And a friend I haven’t seen in a while also stopped by to visit and watch.  A great way to spend the weekend with the dogs. 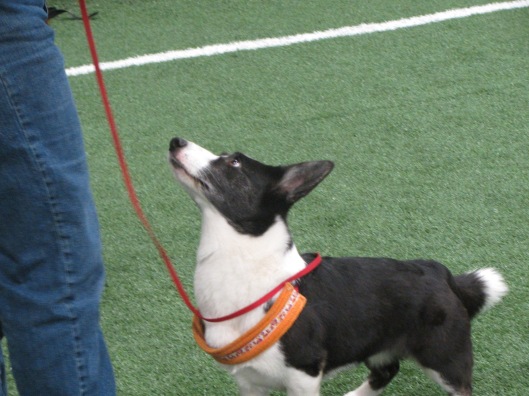