*As of Feb 1, 2019 We’ve moved!* If you like this post please come on over to the new blog at https://www.maplewooddog.com/blog/  Where you can find all the archives you’ve read here plus new posts nearly every week! Hope you’ll join me over at the Maplewood Dog Blog. Thanks!

the pipes the pipes are calling

from glen to glen, and down the mountain side…

Been singing this tune all week because we have Danny visiting!

Danny the lab lying on a dog bed in the house

Isn’t he adorable?!  His family has been doing an awesome job with him, making my job as easy as can be this week.  Which is wonderful.

Danny is a 3m old lab pup.  His owners say he’s a “silver” lab, but really as silver is just a genetically dilute form of the chocolate coat coloration in labs, he’s a chocolate labrador retriever.

Zora and Danny lying side by side in the grass

As most lab pups who have come through my door for training or boarding, Danny has benefited from learning about balanced reciprocal play and that dogs don’t enjoy having their heads jumped on as a way of greeting.  Zora is, thankfully, a great puppy teacher and has been enjoying making Danny her minion.  She tells him what he can and can’t do with her, and with some consistent reminder’s he’s steadily grasping the realities of dog social interactions.  Just yesterday, for the first time, I saw him actually ask her politely if she would play with him, and it worked!  She obliged.  This morning, on the other hand, he forgot and tried the classic lab jump on her head, which yea dude, that’s a no go, she no like that.

He is a sweet moose of a pup.  And a labrador in every sense.  Sweet, a bit slow on the uptake, needs loads of consistent repetition, and is currently a puppy version of Jaws.  Seriously, he tried to eat my concrete garden statue, ignoring the antler lying right next to it.  He is for sure all lab. 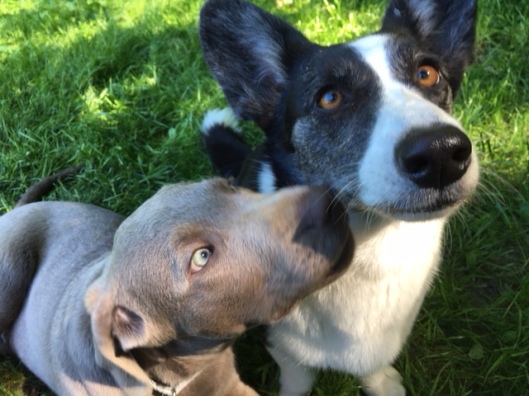 Danny sniffing Zora’s face outside in the grass