I can’t be the only one who experiments on a whim with baking and cooking.  Today’s creation came out rather good so thought I’d pass it along.  Some of the measurements are rather loose, sorry I rarely bake or cook as an exact science.

This mash up of ingredients was not what I thought I was going to make.  I started out attempting to separate eggs.  The universe wasn’t cooperating.  Sure, I’ll blame it on the universe, not my shaking hands, the universe can take the fall for this one today ;-).  First egg separated fine, white into 1 bowl, yolk in another.  2nd egg, the yolk split and about a tsp got into the whites, ok, I fished it out.  3rd egg, white into 1 bowl and then I in one fell swoop threw the yolk into the trash not the 2nd bowl, oops.  4th egg, split and yolk all over the whites.  So I threw in the towel and changed plans.  I thought I was going to experiment with a cake type thing where I beat the whites stiff then added other stuff in, maybe using the yolks, maybe not.  Yea, that didn’t happen.

Instead this is what happened:

Lemon ginger cake right out of the oven

Into a large bowl and beat on high with the mixer for a couple of minutes.  They were frothy and over double in size when I stopped the beaters.

then grate into that about 3/4 of the rind of one medium size lemon, think that was maybe a little over a teaspoon?   And grate in somewhere between 1-2 tablespoons of fresh ginger.  then add the juice of that lemon you grated the rind of off.  beat in until mixed.  (note the cake is rather lemony, which I like, but if you would rather a more subtle lemon flavor I would cut back the amount of lemon rind, maybe grate in the rind of only 1/2 or even 1/3 of the lemon?)

then slowly beat in 1 1/4 c sugar (if you were using a meyer lemon you could use less sugar, I know the lemons I had on had were rather sour from using them in another dish so wanted to try to hedge my bets on balancing that with the sugar).

in another small bowl mix together

then slowly beat that into the egg mixture

once combined, beat in 1/3c olive oil, 1/3c grape seed oil (or you can sub in your preferred fat of choice), and 1/4c agave nectar (you could probably skip the agave, again I knew how sour my lemon was and was trying to balance that out, which it worked, the cake is not too sweet and not sour).  As you beat it will be rather thick and trying to climb the beaters.

pour into a greased baking dish.  the one I used is 6″x10″ by 2″ deep.  I sprinkled a small amount of turbinado sugar on the top to help it brown and crisp.

This cake came out much better than I anticipated.  I wasn’t sure if it was going to be too dense, but the beating of the eggs so much to start I think really helped this to be light and airy.  I am really enjoying it!  Hope you have as much success as I have if you try it yourself.

cake cooling on a rake with a piece cut out for me to eat!  Yum!

Today marks the ducks first complete year of life on this planet!  Tomorrow a year ago, they were packaged up at the hatchery and shipped via USPS where 2 days later my husband and I picked up our little quack quacks to begin this journey of ducks! 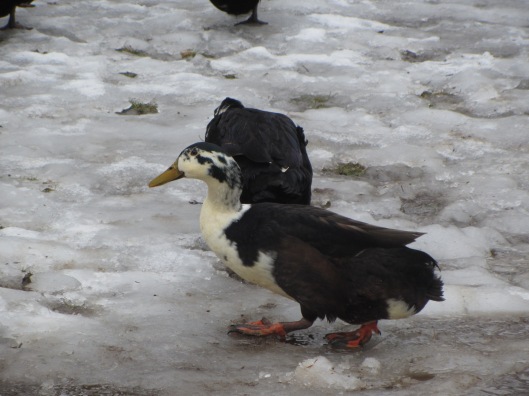 Spot the Drake walking through the icy yard keeping an eye on the world, keeping  his girls safe.

It’s been an awesome experience.  I can’t wait to see what is in store during the coming years with the Squawk Box Gang.

Here are some things I’ve learned a long the way: 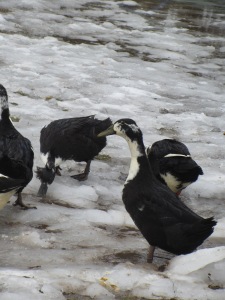 Split the duck standing her feet covered in water, ice and 3 of her flock mates around her

As a birthday gift, I’m letting them destroy the backyard (or at least what they can find of it) for a couple of hours.  We have to reseed it in a couple of months anyway.  And they are getting some special veggie treats in addition to their usual lettuce.

It has been six years since my last doughnut.  That is until this past Tuesday evening.  When I found a way to make doughnuts I might possibly be able to eat.  And I could.  And they are glorious.  I forgot how wonderful a doughnut could be.

I’ve lost count the number of times people say to me, “Oh being gluten free must be so hard!”  No, actually being gluten free in this present day and age is the easiest of my medically necessary dietary restrictions.  If I just had to worry about only gluten free I could have made myself doughnuts years ago!  Or probably been able to purchase pre-made ones somewhere since now there are lots of pre-made options if you have to be gluten free.  Or at least more than there used to be.

For me, with doughnuts it was also the yeast part.  Yea and the dairy part too kind of.  And making sure no nuts or legumes (hi there soy and peanuts) parts.  A few years ago the rice and sugar parts where an impediment as well, but in recent years I’ve managed to get some grains and sugar back into my diet as long as I’m careful about not overdoing it.

Anyway, I made doughnuts on Tuesday night.  Hubby and I ate them.  (dinner of champions)  And they were glorious.  Then on Wednesday my nieces and nephews came over and the doughnuts disappeared for good.  If you too have been seeking a way to make doughnuts you can eat for the past upteen years, well maybe you can eat or modify so you can eat these.

(this recipe was made combining parts of some other recipes found in the Gluten Free and More May 2017 magazine issue, as well as an old fashioned traditional gluten filled recipe I had in my recipe book from my husband’s mother.)

In a medium sized bowl mix below dry ingredients and set aside:

In a separate medium to large size bowl, beat with a mixer until grainy (or your mixer starts to smell like burning, hmm probably a clue it’s time for us to break down and buy a new mixer):

dry ingredients in a bowl to the side, measuring out the sugar and fats 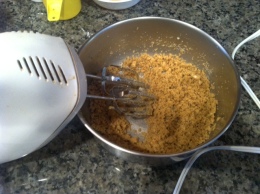 the fat and sugar beat until grainy

Then add into the sugar/fat mix:

Add in to that, beating until well combined:

Then slowly beat your dry ingredients into the wet until well combined.  Beat about 2 minutes.  The dough will still be rather sticky.

Use a spatula to form a ball in the bowl with the dough.  Cover and put in the fridge for 1 hour.

The fully mixed dough, formed into a ball with spatula ready to cool in the fridge

Once dough is cooled, generously dust a counter top (or in gluten free baking I’ve learned to do this on top of a piece of plastic wrap or flexible cutting board to help with ease of removal) with white rice flour then roll out the dough 1/2″ thick.

Cut out doughnut shapes in the dough.  Reforming and rolling it out until all of the dough is cut out into doughnuts and doughnut holes.  If you’re like me and don’t own one of those fancy doughnut cutter outers, a can of tuna (with the tuna already eaten) and both ends removed works (and really well washed because tuna flavored doughnuts, ick), then use a small round-ish cutter for the inner doughnut hole (or carefully trace one out with a knife).  We used a small wreath shapped christmas cookie cutter for the inner doughnut hole.  It worked.  Pretty well actually.

the cut out doughnut shapes ready for frying

Now we get to fry the doughnuts!!

In a deep sauce pan, pour canola oil (or whatever kind of oil your body is ok with, if you can do soy or peanut go ahead, I can’t so didn’t) until a 2″ thick layer is on the bottom.

Heat the oil until it registers 325’F with a candy thermometer.  I have a digital meat thermometer that goes to 500’F so I just used that. 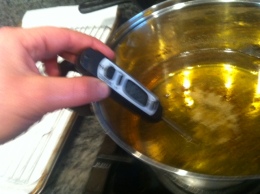 thermometer held in the oil to register the temperature

Once the oil is hot enough, carefully drop a couple of the uncooked doughnuts into the hot oil.  They should sink, then rise a few seconds later.  Cook the doughnuts for 2 minutes then using a fork or strainer, flip the doughnuts and cook another 1.5-2minutes. 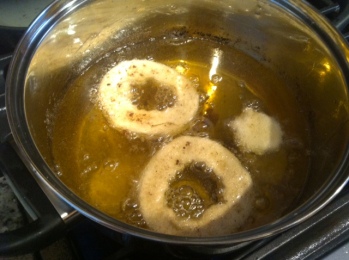 dougnuts seconds after they were dropped in the oil

doughnuts 1.4 min after dropped in the oil, ready to flip

fully cooked doughnuts about ready to come out of the oil 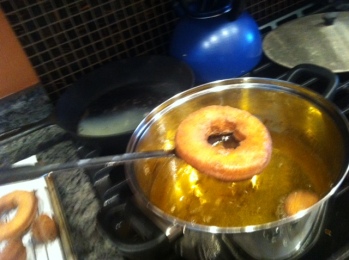 Cooked and sugared doughnuts cooling on the paper towels

When doughnuts are cool enough to eat, enjoy!!  They store in an airtight container for a few days, not that they’d ever last that long though! 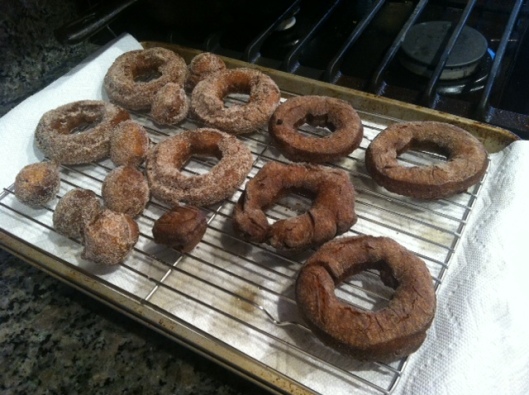 Finished tray of 8 doughnuts and 8 doughnut holes!  1/2 coated in cinnamon sugar, the others plain