*As of Feb 1, 2019 We’ve moved!* If you like this post please come on over to the new blog at https://www.maplewooddog.com/blog/  Where you can find all the archives you’ve read here plus new posts nearly every week! Hope you’ll join me over at the Maplewood Dog Blog. Thanks!

Rock-It asks to be petted.  I ask her how. 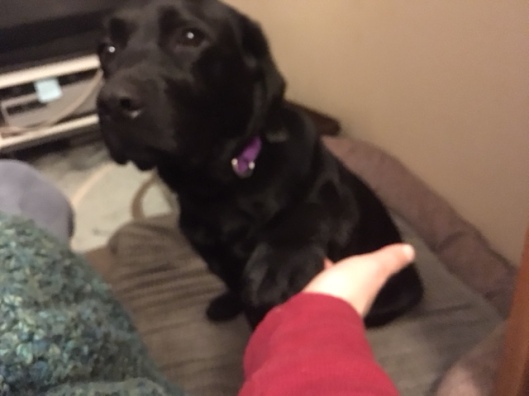 Rock-It with her front paw resting in my hand

And I get a Beatle’s song!

In reality, what I get is a dog who doesn’t really know how to tell me where or how she wants to be touched.  But she’s figuring it out.

Rock-It struggles often with impulse control.  And with wanting physical contact, but doing so in a way that means a lot of bashing around, explosions and disengagement.  It’s actually interesting to watch her pattern unfold.  And start to see the confusion she suffers with every interaction.

She’s so used to people touching her in ways that are beyond her control, that it becomes a form of punishment.  She’s so used to people getting upset when she’s hurts them with her leaping and bashing (trust me, she hurts.  She’s nearly broken my face a number of times in the years I’ve known her).  She’s so used to restraint being part of contact (in part for human self preservation, she wants to be near and be touched so to limit risk of an unexpected leap up, people restrain her in some form hand in collar or otherwise), an unwanted part of contact, that she is a very conflicted sweet dog.

But she’s starting to figure out how to lead the dance.  That I want her to tell me where and how she wants.  That I won’t force her.  That she can leave at any time.  She’s still trying to believe me.  But she’s trying.

She comes up, I offer my hand.  It’s up to her what to do with it.  If she puts her paw it it, I’ll pet her foot then pause.  It’s up to her what to do with it.  Move it, walk away, lie down, nudge me, up to her.  She’s starting to do more than give me her paw.  Now sometimes I get an ear to rub.  Or a cheek to scritch.  Sometimes a bridge of a nose to rub.  Before she used to freeze the moment I started to touch her, freeze or leave (then usually return right in at speed only to leave once more).  Conflicted.  Now sometimes when I pause, she asks me to do more.  She moves my hand to where she wants.  Little by little she’s figuring out it doesn’t have to be about speed, control, explosions, confusion.  It can be about communication. 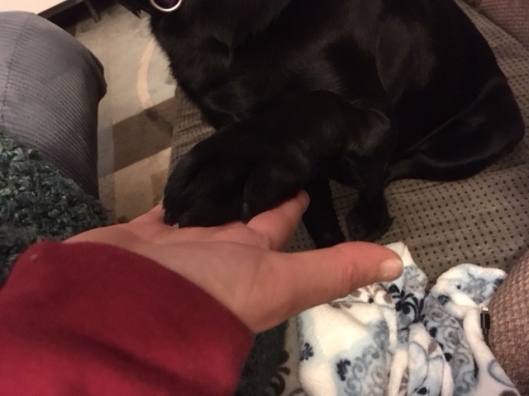 Rock-It and I paw and hand.

Like many dogs, my dogs are not big fans of being picked up or being hugged, but they both do enjoy being lap dogs.  And getting the associated massage and petting. 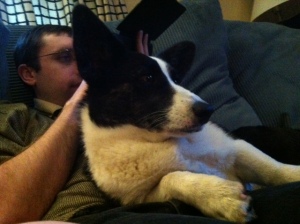 The corgi princess on her rightful throne: his lap

Zora and my husband have a nightly ritual when he gets home from work that involves him sitting on our couch and Z taking up her rightful snuggled in perch on his lap.  We joke that she is his cat-dog because she tucks her paws in just like a little kitty (1).  If he for some reason forgets or is distracted from the routine she gets right put out and blocks his path gradually herding him to the couch so she can sit on him.  It is very cute. 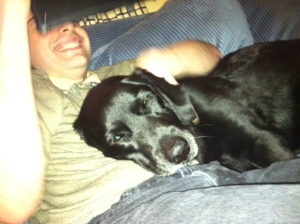 I have you where I want you now! Pet me & never get up! says Tom

Tom will pin just about anyone sitting on the floor.  He lures them in starting with just petting, as he quietly maneuvers himself so that at just the right moment when they least expect it he can sit on their lap.  Ensuring they pet him forever!   I try to warn our unsuspecting guests but they never believe me until they find they have a large Tom dog sitting on them.  He too is also very cute when he does this.

Our dogs also expend copious amounts of energy in training us humans in the fine art of dog petting.  They both think us humans are very challenging subjects to train, and very dense (they would be right, smart dogs).  Both dogs think I am a lost cause (2), though when no one else is available they are eternal optimists so will attempt to train me.  Usually they give up in disgust.  And if someone else is around move on to that person.  The dogs will almost always choose my husband over me to ask them to pet them.  And Tom when he does this, spends the whole time someone else is petting him staring at me going, “See, you should be jealous, other people pet me the way I like.  You should learn too mom!”  It really is quite comical. (3) 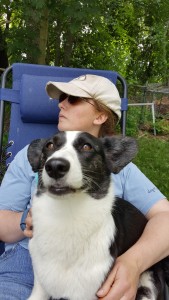 The dogs and I also have a cue, “My quota is full” means yea sorry dogs, I am done petting, I can’t touch you any more go ask someone else.

Tom comes up and stands there

I don’t take the hint

So he moves closer and nudges my hand

I think “Oh Tom, I don’t really want to pet you right now.”  But then I think, “But what kind of dog owner would I be if I didn’t pet him, he clearly wants it.  Gee why do I have a dog who likes being petted?  How many client’s do I know that have dogs who don’t like it?  Maybe someday I will have one of those dogs.  Then I won’t feel guilty for not liking this.”

I start petting under his chin or massaging his ears

He decides he doesn’t want me petting there right now, so he shifts

I then pet his shoulder

He decides to shift again

I then pet and scritch his rear.  Which he enjoys much.

My hand and arms cramp up and get tired or there is just too much dog hair coming out or my sensory system just can’t handle the tactile anymore, so I stop

Tom stands there hoping this was a fluke for a few seconds then sighs, “These humans are so difficult, have to go train her all over again.”

And we start from the top.  He nudges my hand, I pet his head and ears, he shifts, etc, etc until once more I’m done.  And he is not. 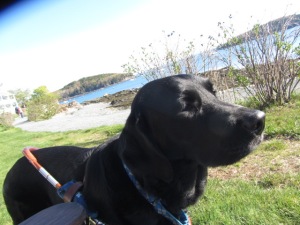 A classic “Pet Me” Pose from Tom.  I will stand here patiently hoping she remembers I want her to pet me.

This repeats until, “Tom Tom, sorry, my quota is full.”  If no one else is around he might give it one last nudge of a go to see if maybe I might find it in my sensory overloaded pain cramping system to pet him further, which usually I don’t.  He then gives a deep sigh, flops heavily to the floor, looks at me pitifully because he is the most neglected dog ever don’t you know.  Then about a half an hour later he tries me again.

Tom.  The eternal optimist.  5 years of trying to train his human.  And he never looses hope.  Maybe someday he will wake up and I will have transformed into the A+ petting human he so deserves.  They say miracles can happen, right?